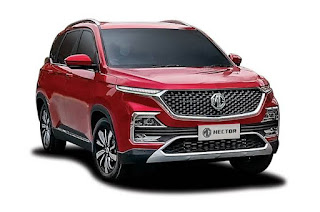 Latest news: MG Motor India has announced that the Hector has garnered 50,000 bookings since its launch.
The Hector can be had with a BS6 turbo petrol engine which displaces 1.5-litres and makes 143PS and 250Nm. A BS4 2.0-litre diesel engine is also available. Both petrol and diesel engines come with a standard 6-speed manual transmission. The petrol motor also has a 6-speed dual-clutch transmission on offer.
MG also showcased a 6-seater variant of the Hector SUV at Auto Expo 2020. The third-row-equipped Hector could be launched by the festive season this October.

The MG Hector can be had with a 1.5-litre turbo petrol or a 2.0-litre diesel motor. The 1.5-litre petrol motor churns out 143PS of power and 250Nm of torque. It is also offered with a 48V mild-hybrid system which improves the fuel efficiency and provides torque boost. The 2.0-litre diesel motor, on the other hand, is the same Multijet diesel found in the Jeep Compass and puts out 170PS and 350Nm. While the petrol, mild-hybrid petrol and diesel come mated to a 6-speed manual, the 7-speed DCT can be had with the petrol only.

It has the right mix of aggression and ornamentation for a modern-day SUV. Those LED DRLs sparkle brightly as they are squeezed against the hood. The generous but tasteful use of chrome as it cradles the large grille and arcs around the fog lamps adds to the glitter effect. Then there are the all-LED headlamps and tail lamps which are available in all variants except for the base! The ORVM-mounted turn indicators, skid plates and roof rails ensure that even the base variant doesn’t look barebones either!It dwarfs other MG SUVs and its competition here in India too. Incredibly, it is longer than the Tata Harrier by a solid 57mm. That is an incredible stat, considering that the Harrier is larger than the Honda CR-V. From the rear, the Hector has some striking similarities to a German brand’s SUV design. The clamshell bonnet and tail lamps that fan out have a Q-factor to them. Get it? Despite the slight gangliness or its derived design, the Hector comes across as a head-turning SUV.
The MG Hector comes loaded with features to take on its well-established rivals. Some highlights here include a 10.4-inch Infotainment system with Android Auto and Apple CarPlay, i-SMART connected-car tech Panoramic sunroof, Electric tailgate 360-degree camera and front parking sensors.Safety features on the Hector include six airbags, ABS with EBD, electronic stability program, traction control and hill hold assist