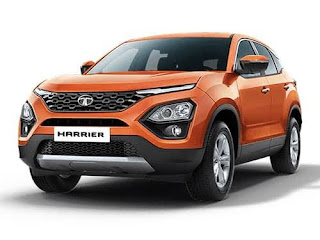 Here are the detailed Tata Harrier specifications and features. Check out its ground clearance, boot space capacity, and kerb weight. Moreover, also have a look at the Tata Harrier fuel tank capacity.

Here are the detailed Tata Harrier specifications and features. Check out its ground clearance, boot space capacity, and kerb weight. Moreover, also have a look at the Tata Harrier fuel tank capacity.

Ever since Tata Motors acquired Jaguar and Land Rover, Indians have been particularly proud that a homegrown carmaker is out there showing the world what we're capable of; however, Tata's cars haven't really had any of the ingredients in them from the British marques. Until 2018 of course, when Tata had unveiled the H5X concept. It proved to be quite the showstopper, for it had shown the public that Tata means business, and were serious about the Indian market. In production guise, it's called the Harrier, and is based on Land Rover's D8 architecture that underpins the Land Rover Discovery Sport. It's a monocoque platform that's been named OMEGARC. The Harrier brings with a sound system that is sourced from JBL, a non-independent torsion beam setup for the rear suspension and the engine and transmission are from Fiat. Also, the Harrier is robust, comes loaded with features, scores well on space, comfort and good cabin quality, rides well over bad roads, and looks striking.
Exterior
One look at the Harrier, and you will be convinced that it looks very identical to the concept. At the front, it boasts of a gloss-black 'Humanity Line' grille, flanked by slender LED DRLs and indicators. Below them sit the main Xenon projector headlamps that look large. It gets a wide, toned bonnet. Along the sides, there are huge, flared wheel arches that house 17-inch alloy wheels. The 17-inch alloys, although, look puny in accordance to the Tata Harrier price and girth. There is even a subtle character line that emerges from the front door and intersects the tail lights. The Harrier, like most SUVs today, also has the floating roof effect with a brushed-metal panel that gets 'Harrier' embossed on it. At the rear, the stylish part-LED tail lamps are connected to a gloss-black strip running across the middle of the tailgate, and that narrow rear windscreen is spot-on. It also gets 'Harrier' badging below the number plate holder. Other details include a faux skid plate and exhaust tips.VariantsThe 2019 Tata Harrier variants are as follows: XE, XM, XT and XZ. Features-wise, it is equipped with puddle lamps, rear AC vents, steering-mounted audio controls, multi drive modes, follow-me-home headlamps, climate control system, 8-way adjustable driver's seat, automatic headlamps and wipers, voice recognition, Android Auto, rear defogger, reverse camera, power folding and adjustable wing mirrors, leather steering, 8.8-inch touchscreen infotainment system, 9 JBL speakers, and terrain response modes. On the safety front, it is equipped with 6 airbags, hill-hold and hill-descent control, traction control, roll-over mitigation, hydraulic brake assist, ESP, ABS with EBD and corner stability control.InteriorSurprisingly, the fit and finish on the inside is at a level never seen before on a Tata car. The faux-leather dashboard looks premium along with the faux wood panels. Even the metallic door handles look solid. And the chocolate-brown leather upholstery looks quite nice as well. The seats at the front are large and comfortable, and everything around feels plush. The 8.8-inch touchscreen, along with the central AC vents, looks like a floating panel. The instrument cluster comprises of a 7.0-inch screen that boasts of a fuel computer and a digital tachometer. The Tata Harrier new model also displays the various driving modes and even navigation information from the main screen. Also draped in leather are the door grab-handles, and the chunky steering wheel. At the rear, there is ample space, thanks to the long wheelbase. Three occupants can sit abreast in utmost comfort, and seated high-up, you tend have a good view of what is around you. The AC vents for the rear passengers are located in the B-pillars. Boot space, at 425 litres, is decent, but you'll have to remove the parcel tray to fit in anything that's too big.Engine Specifications & PerformanceThe Tata Harrier is powered by a Fiat-sourced 2.0-litre Multi-jet ll engine (a.k.a Kyrotec) that produces 138bhp and 350Nm of torque. Power is sent to the front wheels, via a 6-speed manual transmission. There is a fair amount of clatter from the diesel engine on starting the car, and even when on the move. The refinement levels, for the Tata Harrier on-road price and segment, could have been better. The gears and clutch are pretty light in action, and the Harrier is quite responsive as well. It gets three drive modes: Eco, City and Sport. Eco and City modes are best suited for mileage driving. In Sport mode, performance is brisk, and it loves doing three-digit speeds on highways, albeit at a slightly relaxed pace. At high speeds, it feels stable and planted, and ride quality is very impressive – almost every pothole and bump is dealt with comfortably. The steering, at low speeds, is weighty because it's a hydraulic unit, but it also instils a certain amount of confidence at higher speeds. And the Terrain Response System ensures that, in case of a low-traction incident, things are taken care of.MileageThe Tata Harrier's ARAI-certified fuel efficiency figures are rated at 17.0kmpl for the diesel model.